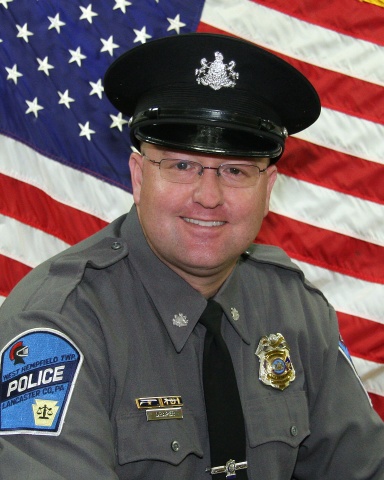 Corporal Draper has been a member of the West Hempfield Township Police Department since January 7, 2002 (January 7th appears to be a lucky date for Ryan).  Prior to joining our department, he was an officer with the Columbia Borough Police Department for 2 years giving him over 19 years of total law enforcement experience.  Officer Draper has served the department in many facets including a bicycle officer, accident reconstructionist, Crisis Intervention Team officer, and DATA Master coordinator to name a few.  Officer Draper serves as a department instructor for computer software programs for the entering and issuing of traffic citations and completing accident reports online.  Additionally, for the past several years he has been assisting in teaching new accident reconstructionist formal classroom material and is a certified Project Lifesaver instructor as well as a Field Training Officer for newly hired police officers.  In 2015, he was named as a platoon designated Officer in Charge and in 2016; he was promoted to the rank of Corporal and assigned to the Patrol Division as a shift supervisor.  Corporal Draper has received numerous commendations and awards during his 17 years of service to the citizens of West Hempfield Township.

Sergeant Draper chose to have his wife, Erika, pin on his new badge.

Sergeant Draper will remain assigned to the Patrol Division as a platoon supervisor.